Expanding the Offerings here at the Farm

Posted by Tinia on November 09, 2011
There are certain things I've insisted I had no interest in raising.
I do not want to grow potatoes or carrots, for instance.
I've firmly said I would not be interested in raising rabbits
or pigs, and here I stand, contradicting my own words.

As I believe there is a resurgence, which is hard to deny,
of the farmer, the homesteader, the urban sustainable family
and so forth, everywhere!

I believe giving people in my area quality options
for living this lifestyle is a wise choice.
I know that I am dedicated to seeing people succeed
in a life of farming and/or sustainability .

As I've sat down and continued to read
the articles on some of the rarest livestock in
America and found so few breeders in a 200 mile radius of
Huntington, WV, we've decided to bring
in some of the most endangered rabbits in
America, the Silver Fox. They are Heritage, non-
industrialized meat rabbits, but since their status is so rare,
they are not typically used for meat at this time in large
numbers, and I admit, as a vegetarian, the more
I can raise to work toward conserving the
breeds that homesteading families used in the days
of old and not need to use an animal for meat
as a result, very often, the better I feel.

"The Silver Fox Rabbit is truly a multi-purposed breed whose genetic make-up has never been divulged. Today it is critically endangered with fewer than fifty annual North American registrations
and there is a global population of less than 500."
http://www.slowfoodusa.org/index.php/programs/ark_product_detail/the_silver_fox_rabbit/

A global population of less than 500, folks!
There are more Mountain Gorillas in the wild than there
are of this breed of Rabbit in Captivity.

We also have applied for an Animal Welfare Approved Grant
(pending our approval for AWA)
to possibly purchase and start a breeding program for the critically
endangered Red Wattle Pig. 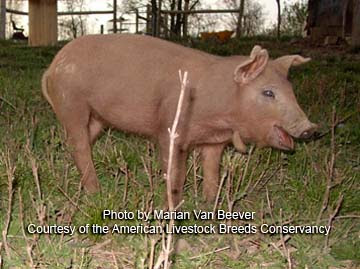 "The Red Wattle hog is listed on the ALBC Conservation Priority List as being critically endangered
meaning there are fewer than 200 annual registrations in the U.S. and estimated to have fewer than 2,000
individuals of this breed globally."

If we do not get approval for this grant, we will still work toward, at a slower pace,
a breeding program, on a very small scale, for Red Wattle Pigs.

I believe it is imperative that those who farm
and are able, try to preserve the non-industrial breeds
of livestock that our grandparents or great-grandparents knew and
felt were important to farming and survival.

This includes the use of heirloom seeds in gardening!
http://www.sandhillpreservation.com/pages/seed_catalog.html