Posted by Tinia on July 24, 2011
This is continued from Homesteading for Dingbats:
Dairy Animals - part 1 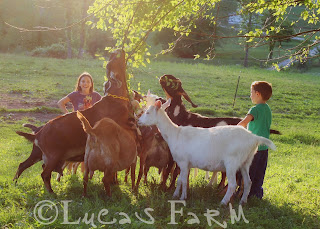 So you have decided, let us say, that you want to go with dairy goats
with your farm's milk producing animals.

You like, then, the low impacte goats make on the land
and appreciate the way they clean up undesirable plants and thorns.

You like the small, manageable size dairy goats come in, and you do
not feel the need to be flooded in milk.

Maybe you like the look of goats over the larger dairy cows.

You do not want to own a bull or have access to AI services,
and you either know you can keep a buck and wether companion
for him, or know someone with a quality buck you can breed
your does to.

You like the idea of the amazing cheeses goat's milk
can provide verses the heaps of butter you might
get without a cream separated and little effort from,
say, a Jersey cow. 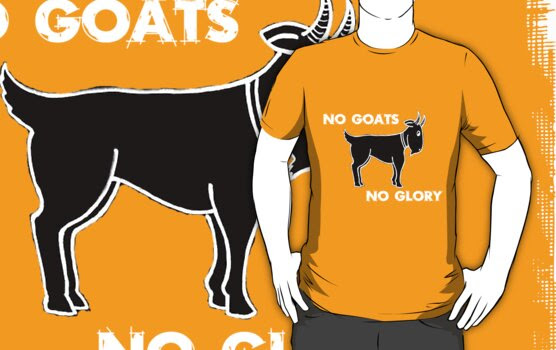 Maybe you picked up the book
Goat Song at Borders at wanted to hear
your own goats create a personal
ditty for you.

All in all, goats, you've decided are for your
homesteading milk needs!

The biggest obstacle in the beginning is deciding
which breed to go with.
This will prove a simple obstacle compared to
the care after your purchase.
Let me stop here and say that you do not need
to do is try to do this the cheap way.
Do not consider buying the foundations
of your herd from an auction
or breeder who has no idea what CAE,
CL and Coccidia is.
Do not start with unregistered animals.

I will explain why later.

Back to the breeds:

The above chart tells you about statistics on milk and butterfat production.

You see Nubians lead the pack in Butterfat and are behind in production,
though the Nigerian Dwarf, not listed, has a higher % still.
The Saanens lead the way in production,
but they have nearly the lowest
butterfat.

I have limited experience being around Toggenburgs, Oberhasli and Lamanchas.
What I know of them I will go over, but Saanens, Alpines, Nigerians and Nubians are
the breeds I know best.

First, Nubians. . . the most lovely of all the breeds,
in my opinion. They are the most popular, so consider that in a
sellers market, you might have a flooded area when it comes to
selling kids.

Because they come in so many colors, people have had a
tendency to breed for spots and flash, and this has hurt the
breed. People have overlooked conformation. They have a
tendency sometimes to fickle, weak constitutions.
They are known for having great feet, something some other
breeds have serious issues with. They have, often, the most
palatable milk,according to many folks. The rich milk is great
for cheeses. They are a large bodied goat, and they make a
great dual purpose breed if you want to produce meat with
extra bucklings.

They are a breed for the snobs, which means buy
Purebred because it is the one
breed people poo-poo American status on (meaning
one relative way-way back in the paperwork wasn't a
Nubian).

They give less milk than most of the other breeds.
They are quirky and very loud. They are stubborn,
but they have the most personality, short of, perhaps,
the Nigerian Dwarf. They are possibly the most personal
and intelligent. This is what endures them to me. That
and they are eye candy! And that butter fat, no other
large breed comes close! 4-6 lbs a day is what I've
found to be typical of the does. Some do 8lbs.

Second, Saanens. The milk house of the dairy goat world.
They are hardy. I got into this breed because of the hardy nature
I observed in them.
They come in only white (Sable is a spring off breed, and they
have color).  This leads some to speculate, and likely justly so,
that the hardy constitution is do to having nothing but milk and
body to breed for. . . no being drawn away into spots and color
breeding.

They are very laid back, a bit lazy, even. They are not very
vocal. They are very large. Some people are put off by the
huge size, but that is what I liked so much about them. They
are prone to bad feet.
You have two camp in Saanen breeders. Those that breed
for mega production and very long lacations, and then you have
those that breed for conformation and do not get that super milker.
Somewhere in between is your best bet. You do want
a doe giving over 8 lbs a day if you are dealing with a Saanen, and
you do want sound conformation, which means decent
feet, strong and straight back and good legs. . .but mainly,
make sure the udder is correct. American Saanens are desirable,
verses Purebred status being what  you're looking for in Nubians.

They are also used as a dual purpose breed.

Alpines come third. They are, by all accounts, a fairly aggressive
goat with other goats, esp. other breeds.
They are hardy, perhaps the most hard of all. They forgive mistakes
made by beginners in their care at lot more so than, say, Nubians
ever would. They are also not very vocal, as a rule. They come in
a variety of colors,  though not nearly as many as the Nubian
or Nigerian.
They are a medium sized to large breed. They are not typically
thought of as a dual purpose breed. They rank right behind
Saanens in production, but you have a smaller, easier to manage
goat for the trouble.
Some people report to me the milk can sometimes not be as
palatable, but then many people feel it is no different than
other milks. They are also a very popular breed. I've found
a gallon a day is typical, or more, of the breed.

Nigerian Dwarfs are a hard goat to not love.

They are tiny and winsome!

They come in all the colors of the rainbow, and they are also
popular pets. This makes finding quality milking stock a bit tough.
Be sure to not get caught up in blue eyes and pretty  colors when
you opt for this breed.
They can really produce if well bred with milky lines,
but they typically have short teats and are so low to the
ground, you might need to invest in milking machine to
avoid issues milking efficiently.
They are amazingly hardy. They usually kid, even as first
freshening does, with triplets and quads are common later on.
The excess bucklings sell easily as pets, so if you're not
wanting to sell bucklings for meat, this is a plus, too.

They can give 1/4 a gallon a day, if well bred for milking, and
they consume a lot less than the large breeds.
They are zany and very fun to watch, but they are can be a bit loud.

Oberhasli, Toggenburgs and Lamanchas are breeds I have not been around
as much, and I have not owned any of these breeds. From what I
know of friends who breed them, the Lamancha usually lands at the top
of lists, despite what someone breeds, as a great producer and with a
great temperament. They consistently are said
to be the most likable breed. The Obers are a nice choice for someone
looking for a Mid sized goat, though they are uncommon and quality
animals are hard to find. The Toggenburg is basically the same, though
less so, I believe, than the Oberhasli. Both Togs and Obers come in
only a single color for each breed. Lamanchas come in a fairly wide
variety of colors.

An increasingly popular option for those looking for a smaller breed,
but those wanting more milk and easier milkability than what is
offered in Nigerians, is a cross between a Nigerian buck and
a large breed doe.

The Miniature Nubian produces a higher butterfat giving
doe than the Purebred Nubian, and the cross creates
a hardier animals than the Purebred Nubian. It is hard
to sell the first and second generation kids because
they usually have helicopter ears, so be prepared
for that. This is what discouraged me from repeating
this breeding. If you're able to buy 3rd and up generation
kids or adults, then they are a nice, hardy cross.
They, like other crosses, if out of Purebred
parents, can be registered through the MDGA.
The Mini Nubian cross will not produce as well
as the other crossed, but again, you're getting
super high butterfat.

Anytime, I have found, you cross a Nigerian
with a large breed, you're going to get a
smaller, hardier animal. The problem really
exists only in whether or not the kids will sell
well because they do or do not look like
the miniature version of the large breed.
The Nubian presents the hardest challenge
in this regard.
Goats have a steep learning curve.

With proper management, goats
are a fantastic joy to own.
The next blog in the Homesteading
for Dingbats series will focus
on choosing a doe or future herd,
what to look for and on management
once you've made your purchase.