When the Farming Thing becomes Too Hard

Posted by Tinia on February 12, 2011
"Edited for the many Typos my husband alerted me to
- I am infamous for them"

Ideally, we would all be up to dealing with the tragedies of farm life and try it out.
We'd fine that it was exactly what we expected and that it fulfilled some raw, real need to really live in us. At least, that is what a person who wants to homestead, in theory, would say and would think.

A realistic person would know going into this, there are going to be sad times where baby goats, calves, and what have you are not going to make it. It cannot always have a happy ending.

Animals do not always make it, and since many are bred for the purpose of consumption by humans, their loss is trivialized, but in many ways, in order for the farmer to live happily, this is a necessary evil, I suppose. You realize these animals are being raised for food, many times, and if they die in birth or the young do not make it through the labor process, the real loss is a financial one, right?

No so for those of us who are entangled in ideas of vegetarianism, those who think of these animals as pets and producers, and at any rate, the loss we just experienced was not of a meat producing animal, but the loss of our dairy doe and her kids, potentially doelings. I did not check to see when it was all over.

In fact, I did not remain in the barn, and there is our crux, really.

On Thursday morning, we went to the barn to find out doe, Eve, trying to kid and two dead kids stuck in the birth canal. I went in and moved them around and got them out. Too late for them, but not too late for Momma, thank God. Her udder was so full, it had tears and was bleeding, an even now, it is a terrible mess, though it looks better, if you can believe that: 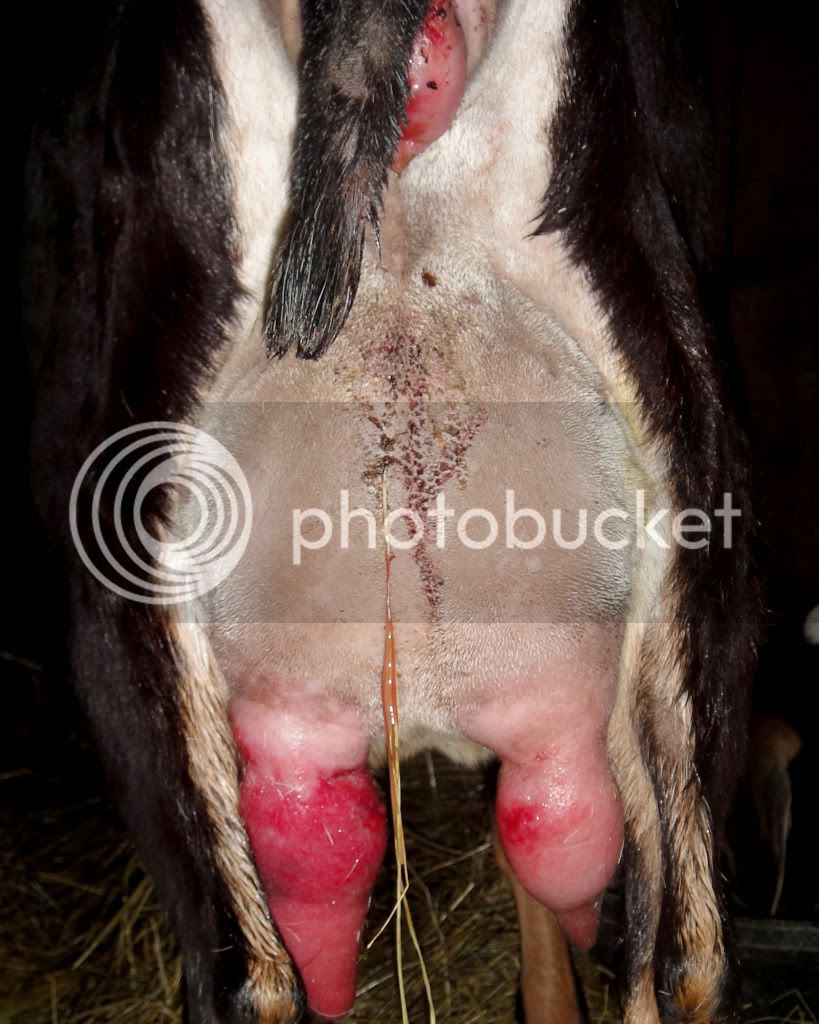 Her udder is ruined. In dairy goats, the udder is vital to sales and production. Her udder looked fantastic prior to this, and now it is a wreck.

We started her on a round of antibiotics to save her from a uterine infection from the kids being half out for so long and me having to go internally and move them.

Never mind the investment lost by the death of these kids and the loss of her udder's value. . .she at least should live, I believe. I cannot be sure.

Then her dam, our first dairy goat, and our favorite, by far, started trying to kid last night. It was taking far too long. It started at 12am with a water bubble, and at 4am, she had not delivered.

PLEASE - If you read this. . .a DOE SHOULD KID within 30 minutes of seeing the WATER bag. If she HAS NOT, there is a PROBLEM!!!


Here is a photo taken while we were trying to decide what to do. 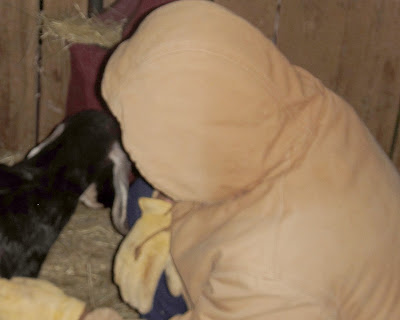 Finally, after giving her calcium injections and Dex to help with contractions,
I went in and realized I the kids were large and tangled.
I could not, though I tried for at least 30 minutes, maybe for an hour,
get the kids out.

This was too hard on her. I knew the internal damage was going to be more than she could overcome. I sat there and pleaded and cried and it was useless.

My husband called our vet, and he said he would come right away.

At this point, the crux of the story, I left. I could not stay. I was not strong enough then.

This defined me as a "farmer"
I could NOT take anymore.

My husband stayed with her. He called me at the house after the vet confirmed that there was no way to get the kids out. I told him to put her down and
go in after and get the kids out. I knew it was too late for them, and I was right; they were dead. I never saw them, but my husband said they were exceptionally large and that she'd never been able to deliver them.

Who knows? Maybe if I'd have been able to turn them right and had went in sooner, I could have. I'll never know.

I could barely tell what I was feeling in there.
When I went in, at least one was still alive. It died while I was trying to get it out.

This sort of thing, I think it is too much for me. I am not cut out of the right cloth.

So now we have lost our favorite doe in a tragic and painful way.
We've lot four goat kids in 3 days.

I have no idea why. We do everything breeders are supposed to do.
We use high quality, free choice minerals, supplement with copper and BO-SE.
We use added calcium during kidding, and still this!

Maybe the buck throws kids that are too large or maybe the does have genetics
that cause kidding issues, but we failed them on intervention.

The moral is that while I saw there trying to pull the kids out, I was sure
I wanted to give the livestock away, sell this place and more to the suburbs.

I still think I want to. Maybe this is normal. I do not know.

We cannot maintain animals with these types of losses. The vet bill will likely be over $300. We've lost $1,500 or more in kids and the doe in the past few days.
A very dishonest show breeder of Saanens and Nubians in Charleston, WV
has failed to refund the purchase price of two does that ended up not being
what he represented, though that is not related to these two does.

Nubians are, I am starting to think, as the old man who disbuds for us

and raises Alpines, "Too hard to keep alive and not worth it."

I am, as I am starting to think, finding this all too hard and not worth it. . .
but tomorrow is, after all, another day, and maybe I will feel better then.